For the first major release of 2022, OMEGA is introducing a new Speedmaster Calibre 321, complete with vintage details and a beautiful design in 18K Canopus Gold TM.

When this legendary collection was first launched in 1957, it changed the face of chronograph watchmaking forever. Created for professional racing car drivers, the watch was perfectly readable and easy to use, and was also the first in the world to feature a tachymeter scale on the bezel, as opposed to on the dial. This feature was ideal for timing average speeds on the track, and complemented the watch’s sturdy, highly-precise and water-resistant design. 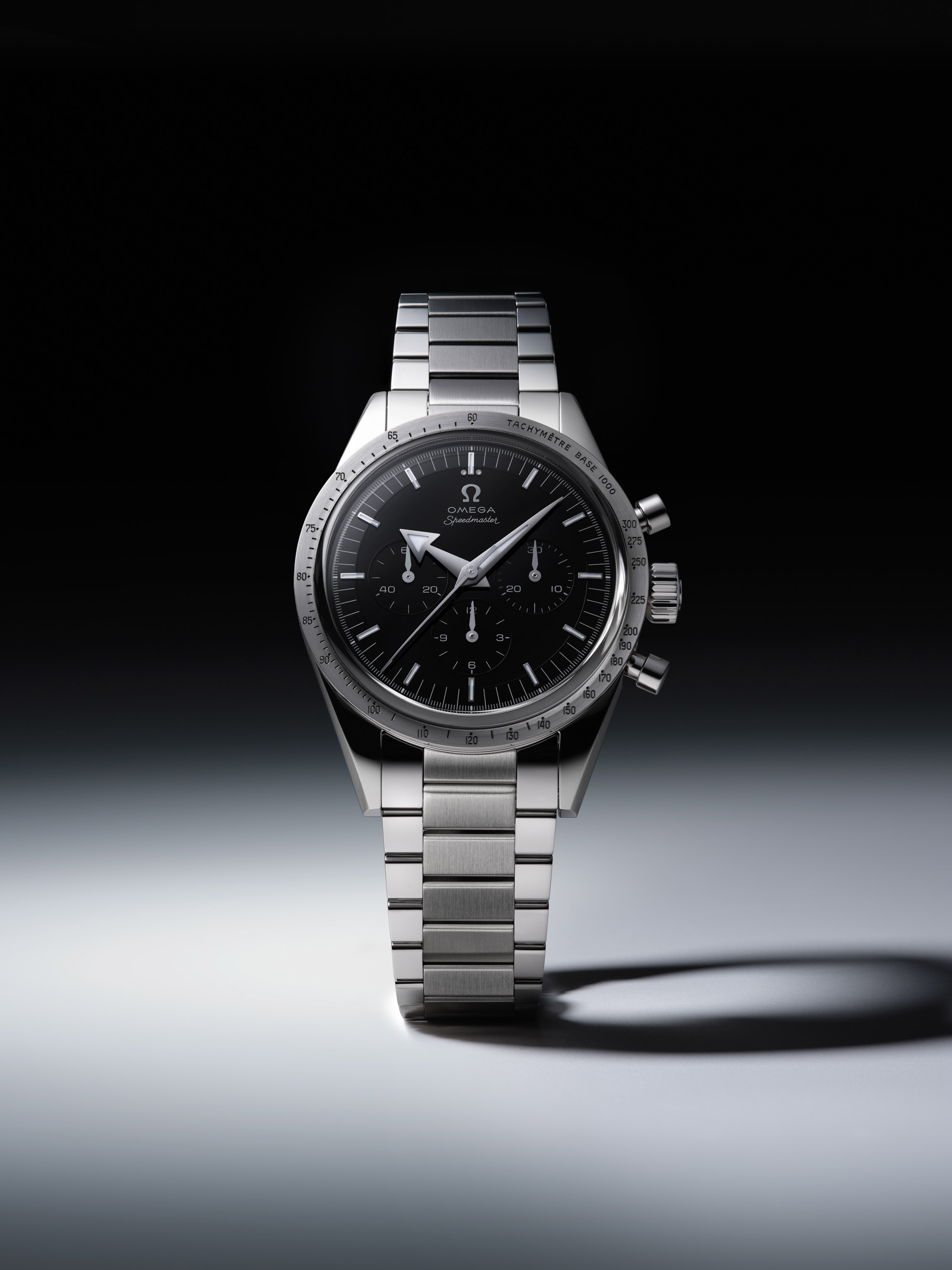 Taking inspiration from that very first Speedmaster, known as the CK2915-1, today’s release marks the collection’s 65th anniversary with a unique 38.6 mm case that has been crafted in 18K Canopus Gold™. This exclusive material is OMEGA’s own white gold alloy and is distinguished by its high brilliance, whiteness and longevity. Watch connoisseurs will also be able to pick out the NAIAD symbol on the watch’s crown, which was specifically used to reference water-resistance in some of the first CK2915 models.

For the ultimate contrast, the watch has been given a deep black onyx dial with an applied vintage OMEGA logo and typography featuring an oval “O" - a detail that was typical for the first CK2915 models. There are also 18K white gold hands and indexes with a Canopus Gold™ PVD treatment and the three classic Speedmaster subdials including a small seconds display, 30-minute recorder and 12-hour recorder, along with the central chronograph function.

Of course, the famous tachymeter scale is there too. On the bezel, it has been filled with black “Grand Feu” enamel, and if you look closely, you'll also see two of the original Speedmaster’s most collector-worthy details: the famous dot over ninety (DON) and a dot diagonal to seventy.

Perhaps most sought-after of all is the famous movement inside the watch. The Calibre 321 was the original movement used inside the Speedmaster in 1957. It also powered the watches worn during the Apollo missions, including all of history’s six moon landings. Since 2019, OMEGA has brought the Calibre 321 back into production, carefully retaining all the authentic specifications. Adding it to this new release gives the watch added provenance and a genuine connection to the Speedmaster’s heritage.

Turning the watch over reveals a further tribute to the collection’s anniversary. An engraving of the OMEGA Seahorse – a brand icon used on the Speedmaster since 1957 - has been added to the inside of the sapphire crystal glass. Its eye has been made from a sparkling blue sapphire, a precious jewel that traditionally marks a 65-year celebration.

The Speedmaster Calibre 321 watch is set on an 18K Canopus Gold™ bracelet with a comfort release adjustment system and is presented in a special wooden box. Crafted with a Rosewood-like pattern in honour of the collection’s 65th anniversary, the shape and design of the box is inspired by the original Speedmaster boxes that customers would have received in 1957.

Learn more about the timepiece at OMEGA boutiques and Rivoli stores, click here.

A writing tribute to the great pioneer and visionary founder of the prestigious Ferrari automobile marque For high-resolution images, please visit:…

In 1999, “The Matrix” asked viewers to free our minds – to choose a safe but false future or to enter a dangerous reality and…